Get to Know a Grape: Cabernet Franc

This week, we're breaking away slightly from the world of big-name grapes to look at a somewhat lesser-known red: Cabernet Franc 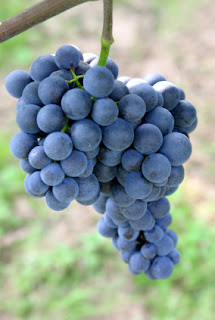 Cabernet Franc may not enjoy the same global reputation as Cabernet Sauvignon, Merlot, or Pinot Noir, but it sure is a versatile grape. In addition to being blended with better-known reds around the world, it is also vinified on its own in the Loire Valley's Chinon region and used to produce red icewine. Cabernet Franc tends to make lighter wine than its Cab Sauv. cousin in both colour and flavour. On its own, it produces bright but lightly-colour red wine with peppery aromas. Because of its lightness, most winemakers prefer to blend it with heavier, fuller-bodied grapes, such Merlot and Cabernet Sauvignon in Bordeaux and Italy or Shiraz in Australia. In fact, if you've ever had wine from Bordeaux, chances are you've tried Cabernet Franc, even if you didn't realize it!

In addition to being popular in blends, Cabernet Franc can produce beautifully subtle, elegant, and complex wine when vinified and bottled on its own. Cab Franc wines tend to have aromas of pepper, raspberries, blackcurrants, violets and green bell peppers as well as being smooth on the palate and easy drinking. It is therefore perhaps unsurprising that an increasing number of winemakers around the world are bottling unblended Cabernet Franc. Indeed, the grape is becoming increasingly popular in Italy's Friuli and Tuscany regions, as well as Califronia, and Washington State, where it often has a fruity palate.

Cabernet Franc grapes are similar to those of the better-known Cabernet Sauvignon, but generally prefer cooler climates. This has helped it thrive in some of the world's colder wine-making regions, such as Ontario, Austria and Germany. It is also often used as an "insurance" grape in Bordeaux by wineries that fear early frosts will damage their harvest, since it is hardier and more likely to survive a cold snap than Cabernet Sauvignon. Cabernet Franc does particularly well in chalky and sandy soils. Because of its light body and colour, Cabernet Franc pairs well with lighter dishes, such as gnocchi, duck, chicken in white or red wine sauce, or the famed British meal: bangers and mash.

To quote Maggie Hoffman, we should all be drinking more Cabernet Franc! This grape is amazingly versatile and can be easily paired with everyday foods or drunk on its own. It may be difficult to break away from the Merlots, Cabernet Sauvignons and Shirazes of the world, but we encourage you to give unblended Cabernet Franc a try!
Posted by Illusha at 2:00 PM