Get to Know A Grape: Merlot


In this week's Get to Know a Grape feature, we're taking a look at a dominant, powerful red: Merlot. 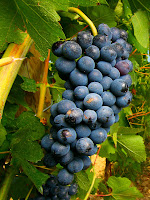 There are few red grapes bigger, bolder, and better-known than Merlot. Even Shiraz, Cabernet Sauvignon, and Pinot Noir can't quite match up to the global reputation that Merlot enjoys as a dominant, fruity red. Merlot is generally medium bodied when vinified on its own, although it can be made into very full-bodied wine, as in Bordeaux, where it is blended with Cabernet Sauvignon and Cabernet Franc. When used in blends, Merlot's usually acts to soften the wine and add body to lighter grapes. Alternatively, when bottled on its own, Merlot makes for a fruity, medium-bodied wine with delicious hints of cherry and blackberries.

A little bit like Pinot Noir, Merlot is a thin-skinned grape, which makes it susceptible to early frosts and rot. The thin skin also means that Merlot grapes ripen earlier but also have a propensity to over-ripen very quickly (sometimes in a matter of days). This has led to some debate about the best time to pick Merlot, with some winemakers preferring to harvest their Merlot earlier to maximize acidity and avoid risking over-ripeness and others opting to harvest later in order to get more mature, sugar-rich fruit.

Merlot is perhaps most popular in Bordeaux, where it plays a major part in blended wines. However, it has also become increasingly popular in the cooler regions of Australia, California, Italy, Chile, and Argentina. It has also done well in Washington State, a region once considered too cold for red wines but now acknowledged as a good climate for cool-climate red grapes like Merlot. According to the Oxford Companion to Wine, 260,000 hectares of Merlot were planted globally as of 2004, making it one of the most popular grape varietals in the world.

Merlot wines often spend at least some time in new or old oak barrels. The oak adds additional flavour, structure and tannin, making Merlots great wines to age before opening. However, many Merlots spend only a fairly short amount of time in oak (6 months or less), and these make for an excellent introduction to red wine for new wine drinkers, as it allows them to experience a fruity, powerful grape without being overwhelmed by oak and tannin. When oak-aged, Merlot can be paired with a wide variety of food, including pizza, meatballs, pasta in tomato sauce, ribs, or Chinese food. In short, Merlot really is a perfect wine for both an everyday dinner and that special occasion event.