Get to Know a Grape: Tinta Barroca 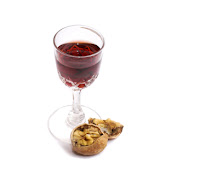 Unless you're a port lover, you've likely not heard of Tinta Barroca. However, this red port grape is the third most-planted grape in Portugal after Touriga Franca and Tinta Roriz! As the monicker of 'port grape' implies, Tinta Barroca is primarily used in the making of fortified wines (read: ports) in Portugal's famed Duoro valley. The grape has a thin, dark skin and produces good yields, but can fare poorly in high heat, which can cause the grapes to shrivel on the vine, which certainly doesn't make for good port! In order to avoid this, winemakers normally plant the grape on higher altitudes or on northern-facing slopes to limit sun exposure.

Tinta Barroca is useful in producing slightly jammy and rustic wines, which allows it to add fruitiness, and colour to port blends without also adding too much tannin. The grape also has high sugar content, which is allows it to develop a large amount of alcohol via fermentation (another useful feature for making port, as it lowers the amount of spirit that has to be added later). Tinta Barroca is rarely vinified on its own in Portugal, instead being used in blends for both ports and unfortified red wines. It is also sometimes grown in South Africa, where single-varietal bottlings can be found. These tend to be very intense, high-alcohol wines that are not the most approachable. However, blends with Tinta Barroca and other Portuguese reds, such as Touriga Nacional, Touriga Franca, or Tinta Roriz can make for some fantastic wines. The best Tinta Barroca is still to be found in port, however.

When it comes to port and food, cheese tends to be a strong candidate. In particular, salty cheeses like Roquefort or Gorgonzola can provide nice contrasts to the sweetness of port wine. Almonds and walnuts can also be used as a nice complement and to bring out the nutty flavours of a vintage or colheita port. Desserts with citrus, such as lemon tarts, can also make for a nice pairing, particularly with 10- and 20-year tawny ports.